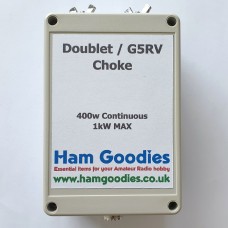 This is a no compromise solution.  A robust 1:1 Choke Balun for use with a Doublet or G5RV where ladder-line meets coax - Perhaps just after your ATU.  You could also position it at the base of a resonant vertical - to act as a choke/isolator.  We don't cut corners: This balun is wound on an FT240-31 offering resistive performance between 3.5MHz and 30MHz so a perfect solution for your all-band HF aerial - and it's rated for over 400 watts continuous.

160m/80m : If you intend to use this Choke mostly below 15MHz, we can supply it with 12 turns instead of the usual 8. This gives improved choking performance on the lower bands but it can still be used across the whole of HF.

Using Balun on a G5RV - Really?
Some articles say you should, others say you shouldn't.  G3TXQ's website explained why you should and included some pretty diagrams to prove his point.  Our own experience (and the lack of units sent back to us!) tells us that using a Choke/Balun on a G5RV is indeed a wise move.  In his original description of the G5RV, the inventor suggested use of a Balun but had changed his mind by the early 1980s.  Modelling software now allows us to delve deeper into the science without climbing a ladder or walking down the garden in the pouring rain.  It doesn't stop the disagreements on the QRZ Forums, unfortunately :)

Baluns - What/Why?
It's good practice to put a Bal(anced)Un(balanced) where coax meets aerial or balanced-feeder.  A Balun will help prevent "common-mode current" on the outer of the coaxial braid - This is vital to ensure that RF does not flow down the coax, turn it into part of the antenna system and give you "RF in the Shack".  Using a 1:1 Current Balun at the junction of balanced-feeder+coax is preferable, in most cases, to a 4:1 Balun - and certainly better than the internal 4:1 (voltage) balun found in many tuners!

We do not advise the use of "ugly chokes" (air-cored coils of coax) for use at HF - these do not offer a consistent choking impedance and, in some cases, can actually increase common-mode current!  Simply put - Use a 43 or 31 mix ferrite toroid and a coax of a suitable power rating.  At VHF, a few turns of coax is perfectly adequate - for 50MHz/70MHz, Aerial Parts of Colchester offer a ready-made choke for a yagi.

2:1 Balun 100w
£40.00
Add to Cart
Cookies may be stored on your computer by this site for the purposes of auto-login and checkout